There was once, in London in the 1920s, a now largely forgotten author named Michael Arlen, an Armenian born in Bulgaria, whose elegantly light and playful style skates over abysses of sorrow and loss. One could speak the like of the Armenian-American composer Alan Hovhaness, whose setting of ‘My Heart is Shattered’ combines elegance and regret in much the same way. Similar emotions are woken by several of the pieces on this recording by Armenian duduk master Petrosyan; the initially lively ‘Srapar’ dance forges ahead with a strange halting rhythm, discomfiting and light-footed at the same time, but with a sense of grief welling from below. Other melodies embody a deep melancholy, restful or despairing, whether accompanied by a simple drone, the heterophony of the qanun (zither) or sophisticated harp textures. Petrosyan, whose history is rooted in three modern nations, taps into these feelings with consummate understanding. In his hands the duduk, akin to the oboe but with a deeper and richer tone, shows itself as capable of performing compositions by revered court musicians, instrumental versions of modern troubadours, and dance tunes. All of them remain tinged by a sadness that bears witness to a long and distressful history. 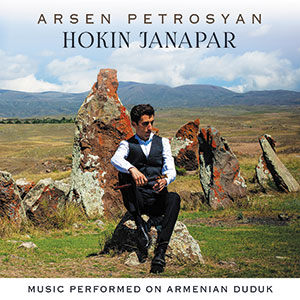