Lin Shicheng (1922-2005), the late master of the Pudong School of pipa playing, was one of the most highly regarded performers and educators of Chinese traditional music, with an international reputation that led to him being known as the Ravi Shankar of the pipa. Through the reconstruction of old scores, and the collection and adaptation of regional folk songs, which he then arranged for the pipa, no other player has done more to expand the repertoire of the instrument. This recording is a selection of pieces performed on a tour of the US in April-May 1996, as a duo with his best student Gao Hong, herself a highly regarded performer and educator.

The album starts in lively fashion with the Jiangnan sizhu ‘Three Six’ – the uncommon duo pipa arrangementdrawing out all of the mellifluous counterpoint the tune has to offer. The solo ‘Autumn Thoughts’ is of a starker, more contemplative mood, with Lin Shicheng’s deft left hand vibrato evoking a disquieted mind on a tranquil night. Gao Hong is given her own space to shine, particularly on the stunning performance of ‘Dragon Boat’, in which the pipa conjures the excitement of a boat race by imitating the sounds of gongs and drums. The album closes with an arrangement of the famous wen (civil) style piece ‘Moonlight Over the Spring River’, here adapted for pipa and zhongruan. Recorded in a single, unedited take, this is the only recording of this arrangement of the piece, and serves as a capstone to an essential document of pipa mastery. 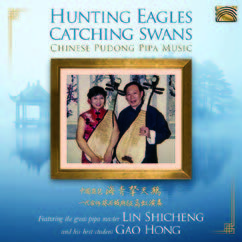