From the long-established English vocal harmony trio comes an homage to the music and song of World War I, one of several in this centenary year. Coope, Boyes & Simpson have been involved with the In Flanders Fields Museum in Ypres since 1993. The music that came out of the Peace Concerts Passendale is featured here with period songs and tunes on a sprawling selection, with 50 songs that run the gamut from minute-long tongue-in-cheek trench ditties to five-minute dirge-like hymns.

Most are sung unaccompanied, with their distinctive harmonies bringing telling resonance to the trench and marching songs of the soldiery. However, the piano is also used to haunting effect on several numbers, sparse and echoing against the bare voices. The best of the rawer numbers – ‘We’re Here Because We’re Here’, ‘Hanging on the Old Barbed Wire’, and Simpson's brilliant ‘Living it Up’ – are reminiscent of a football terrace, and that's meant not in a disparaging way. Replete with gutsy swearing and wry humour, they have an unabashed immediacy that places the 21st century listener into a Flanders trench more surely than any number of reflective odes written after the event. Boyes’ ‘Along the Menin Road’ and ‘Shule Agra’ are meditations on the existential condition brought starkly into view by the horror of war. They are the highlights of this very generous haul of music and song of and inspired by the war to end all wars, revealing the importance of resurrecting this music even a century on. 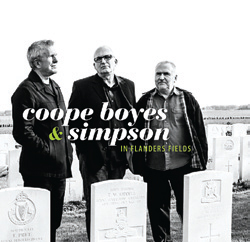