Ink of the Rosy Morning

Like a number of albums released this year, the root story behind the Cambridge duo’s debut for Topic Records is wrapped up in the 2020 lockdown and the subsequent world-changing wave of pandemic conditions, from which this luminous, arrestingly beautiful set of mainly traditional folk songs emerges.

Recorded simply and sparely in an old schoolhouse in Hastings, they lit a fire in the dining room, opened some wine, set up a few mics and started playing. They’d already had a third album ready to roll. They rolled that into the long grass, and with nothing pre-arranged – and with no thought of releasing the subsequent performances – they set down this quietly intimate set of ten songs, beginning with ‘A Winter’s Night’, from Doc Watson, taking us into ‘Polly O Polly’, a song Hannah Sanders has travelled with for many a tour, through to refreshing takes on familiar ballads like ‘Sweet Nightingale’ and ‘Lark in the Morning’. A line from the outstanding ‘When First I Came to Caledonia’ provides the album title, and their performance is a close match in emotive force to the otherwise peerless version from the late Norma Waterson. Instrumentally, it’s spare, lyrical and intimate, their solo and harmonised vocals bringing each of these songs back home. 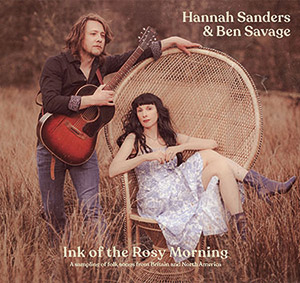 Ink of the Rosy Morning