The nyatiti is an eight-stringed plucked lyre of the Luo people in Kenya. Played in a fast and rhythmic way, it can provide a danceable groove; in fact, it’s one of the ancestors of benga music. Otieno approaches the nyatiti in a different way. Hailing from Kisumu on the shores of Lake Victoria in western Kenya, now based in Newcastle upon Tyne, Otieno plays the nyatiti in a much more introspective way, creating considered and atmospheric moods. On KWEChE, he maintains the instrument’s distinctive timbre, with its subtle buzz on each string, but the music it leads deals with weighty topics based on the cultural differences and adaptations so noticeable within a diaspora community.

For an album based around the nyatiti and Otieno’s high-pitched song, the best moments come when we’re given something a bit different. The track ‘Oyao Tich’, for example, with its lightly Celtic folk fiddle, ‘Buok’ with its Indian bansuri (flute) or the closer ‘Andiwo’ with its more upbeat feel and fresh, airy guitar, all buck the trend and are standout tracks as a result. It’s great to hear the nyatiti in focus and KWEChE has its moments, but with notable exceptions, it seems to hit the same beats fairly often. 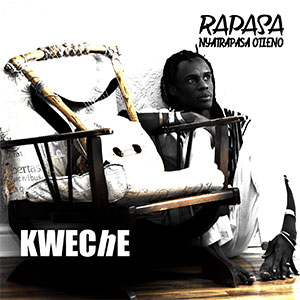