Notes For a Maiden Warrior

Borders run through Dani Larkin’s life and work. A native of the Armagh/ Monaghan borderlands, she has worked in peace-building and conflict resolution in Israel and Palestine, Romania, Indonesia and Colombia, as well as being an ambassador for the Belfast-based Beyond Skin, which uses the arts to foster a more equal and intercultural society. Across the ten tracks of her debut album, the ‘warrior’ mythology of Ulster – Cú Chulainn, Macha’s curse and all – is evoked in songs that evoke the warrior not in its violent masculine mode, but as a maiden-warrior change-maker using a condensed arsenal of story, myth, legend and introspection. Banjo-driven openers ‘The Mother Within’, ‘Bloodthirsty’ and the guitar-based ‘The Red (Macha’s Return)’ draw on the transformative female warrior mythos, while later songs, from the evocative guitar and voice of ‘The Magpie’, the percussive single, ‘Samson & Goliath’, through the three-part ‘Love’ and the closing ‘Three Wise Women’ (a mythic grouping that girdles the world) find Larkin exploring new mythologies of the maiden as protagonist, not victim. They’re compact songs and strong performances, with distinctive vocals and string work, and she’s deftly supported by touches of viola, cello and percussion. Expect to hear much more of Dani Larkin. 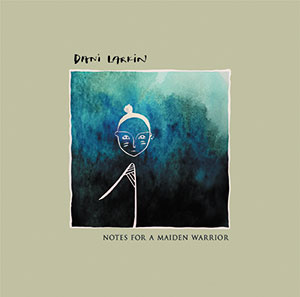 Notes For a Maiden Warrior