This remarkable collection from the always high quality label Sublime Frequencies is one of those rare ones that any music collector will treasure even amid compilation fatigue. Featuring recordings made on 78rpm shellac records in Japan starting in 1903 (a mere 35 years after Japan was forcibly ‘opened’ after more than 200 years of almost total seclusion under the Tokugawa shogunate) by Fred Gaisberg of the British Gramophone and Typewriter Company, these 15 short selections are a miracle, a time machine to a period documented historically extensively in print but with little to no sound recordings.

The tracks include various types of Japanese music including court music, chamber tunes, street musicians, shamisen and geisha songs. Most remarkably, and the track that I was most astonished by, is a rakugo recorded in a local bath house. Rakugo is a Japanese storytelling form where the performer will play on language to deliver amusing (sometimes bawdy) tales, voicing multiple characters while seated in front of an audience. This recording of a performer named Yanagiya Kosan is a historical document of sure purity and authenticity; I could immediately see the scene of a crowded, working class public bath in Tokyo with many areas still retaining the feel of the Edo, pre-modern period. Needless to say the sound quality on this is very raw, and it is a compilation targeted more towards scholars than casual listeners. Regardless, this is one that any listener with a deep interest in Japan should purchase. Includes extensive and informative liner notes. 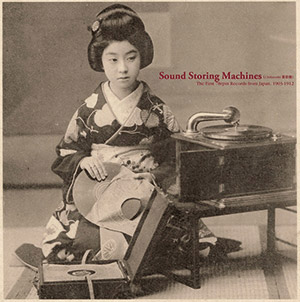