French production duo (and brothers) Harry and Xavier Veynand have chosen an appropriate title for their first album: it feels like a good chunk of the world’s music is represented across this album’s eight fully-instrumental tracks.

In just the opener, ‘Stella Marina’, one can discern elements of reggae, salsa, Afrobeat, Ethio-jazz and something of a Manu Chao-meets- Amadou & Mariam vibe, all within a nest of cool funk. The rest of the album carries on in a similar fashion. Among lots of dub and synthedelic grooves there are blues licks, Indian and Arabic rhythms, chicha, mambo, Beatlesy raga-rock, and much more besides. A recurring focus is on assouf, the guitar sound pioneered by Tinariwen; Tune In’s version works well paired with the dub production but lacks the desert isolation that makes the style so intoxicating in Touareg hands. There are lots of good ideas here, but perhaps there are just too many. Fitting it all into half an hour gives the effect of being bombarded by global influences in a way that can get a bit exhausting after a while. A debut of enjoyable tracks, but best appreciated in small doses. 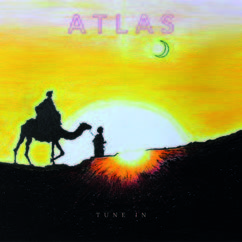