The Four Provinces is an area pertaining to four distinct administrative subdivisions located in four different Italian regions (Lombardy, Piedmont, Liguria, Emilia). It's an impervious mountainous area not far from Genoa where traditional music was based on the pairing of piffero (folk shawm) and accordion. Revived in the 70s, local bands updated its sound and songs: Baraban, Tre Martelli, Suonatori delle Quattro Province. The latter was founded by one of the key musicians of this tradition, piffero player and singer Stefano Valla, who joins forces on this album with accordionist Daniele Scurati and two classical players, Nicola Segatta on cello and Marcello Fera on violin.

Here, a wide repertoire of traditional songs and dances receives a variety of rearranging and improvising in a dialogue with the strings. The reedy quality and intonation of the voice echoes the shawm, which is set in sharp contrast with the soft classical sound. It is a dramatic and fascinating effect, wonderfully apparent in the virtuosic ‘Levar di Tavola’ (Clearing the Table), a suite of dances to end the meal. The good news (Bellanöva) is that this tradition is still alive, vibrant and evolving in new forms. 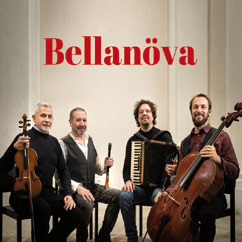