Winnipeg native Raine Hamilton’s third album is an enthusiastic fusion of chamber string music and fairly typical folk singer-songwriter structures. The dynamic and often surprising string arrangements, with Hamilton’s violin accompanied by the cello and double bass of Natanielle Felicitas and Quintin Bart, provides the most interest here, particularly on songs like the title-track, with its arpeggiating bowed notes, and ‘Mountain Henge’, which incorporates a gorgeous violin line along with playful accompanying low strings.

Brave Land is, however, a slightly uneven album and its blend of folk and chamber music is sometimes less successful. The lyrics are neatly written throughout and the songs are undoubtedly well performed, but there were points, like on the synthetic ‘It Matters’, where less emphasis on backing vocals and production would have been preferable to allow more room for the beautiful and intricate music to breathe. Indeed, the best song here is the instrumental ‘Dreamer’, which plays out a stunning classical sounding arrangement that shifts and undulates wonderfully. It is a fully formed piece that demonstrates just how good this artist can be. 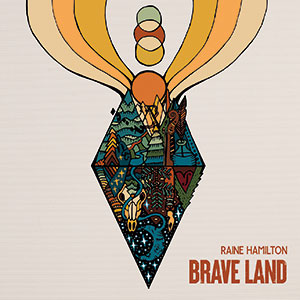