Since their inception a decade ago, Bogotá-based Colombian cumbia pioneers Frente Cumbiero have been a force to be reckoned with. Their debut release featuring UK-based dub producer Mad Professor – part of the British Council’s Incubator project – showcased their centrifugal blend of jazz, electronics and home-grown porro and cumbia rhythms; last year’s collaboration with Japan’s boisterous Minyo Crusaders was aural pyrotechnics. Now comes the similarly explosive Cera Perdida (Lost Wax), a work created under the aegis of founder Mario Galeano (Ondatrópica, Los Pirañas) with his new four-piece line-up. This time around it is less electronics, more ‘tropicanibalismo’ as the music of Colombia’s Caribbean coast is given prominence and meaty contemporary bite. Traditional gaita (flutes) are wielded alongside timbales, clarinet, saxophone, and the doughty brass bombardino (euphonium), which lends oompah theatrics to a mix already partified by electronic beats and samples of, um, bagpipes. Explosive opener ‘La Era del GigaHertz’ starts as the album means to go on, careering through psychedelic synth soundscapes like a runaway juggernaut. ‘Jaley Jaley’ has a touch of dub, deft brass flourishes and a creeping tension that erupts in a club-floor drop; ‘Porrovia’ takes porro – a cumbia style that imitates military marching music – out of its box and sends it skywards. Dance? Will you ever. 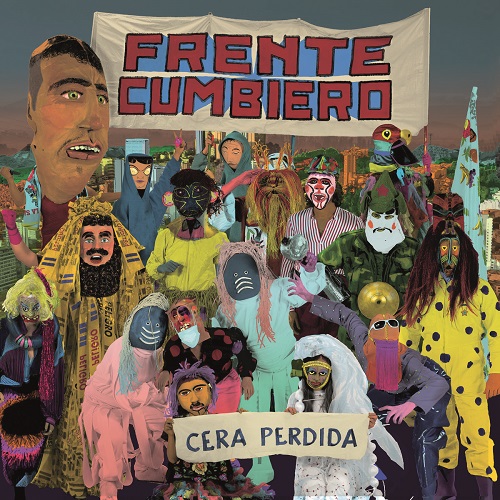