Greek folk tales set to thrash metal ‘music from hell’ (that’s how their fans, not their critics, describe them) may not be everyone’s cup of raki but for those with a penchant for this raw and abrasive yet strangely addictive sound, the sophomore album from Cretan post-punk rockers Balothizer is well worth a listen. Formed in London but hailing from Greece’s largest island, the trio take their homeland’s already fiery folk tunes and turn up the ear-splitting and teeth-jangling intensity to create a musical maelstrom. Mixed by Deerhoof’s Greg Saunier, with vocals from singer and bassist Pavlos ‘Pav Mav’ Mavromatakis of Electric Litany and The Turbans, and drumming from Stephen ‘Bongo’ Payne who has worked with the likes of Jools Holland, there’s a real vitality and infectious energy to songs such as ‘Ponente & Levante’ which takes a traditional Cretan tale about a medieval knight roaming the island with only his sword for company and transplants it to a soundscape more reminiscent of a heaving beer-stained moshpit. The dark and brooding final track ‘Anathema’ is the closest things get to melodic but the whole album rewards repeated listening to find nuances through the noise. 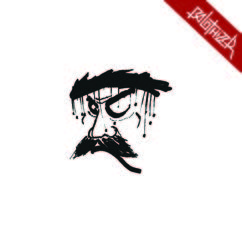