Ffiniau is Welsh for ‘borders’ and harpist and singer Bethan Nia’s debut album explores the boundaries that exist between people, languages and worlds, while staying rooted in Welsh folk traditions. It features lyrics in Welsh and English, and her harp and clear-as-glass voice are accompanied by subtle strings and electronics, and keyboard work from producer Charlie Francis, who has worked with everyone from punk poet Patrick Fitzgerald to REM. The pieces here are drawn from a decade’s songwriting, and much of it is what Nia herself describes as ethereal Celtic folk, with traditional songs such as ‘Bugeilio’r Gwenith Gwyn’ (Watching the White Wheat), about a landowner’s daughter’s doomed love for a poor farmhand, and a shimmering, echo-laden take on ‘Cân yr Ychen’, a song recorded by folklorist Meredydd Evans and the band Hwntws, while Oysterband member James O’Grady’s instrumental ‘Kananaskis’ features Nia’s harp with the crwth, an ancient Celtic bowed lyre of ineffable beauty.

The songs featuring kit drums work less well, and on the likes of ‘Bugeilio’r Gwenith Gwyn’ I’d rather hear her harp, voice and strings free of drums. Her aim is to ‘relax, soothe and enchant listeners,’ and Ffiniau does not fall short of that aim. 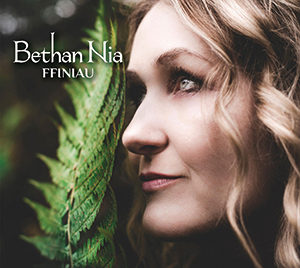