This debut album from Tunisian percussionist Houeida Hedfi translates from the French as ‘Rivers of the Soul’, and it’s a trippy ride round some of the world’s greatest waterways – from Asia’s Yamuna, Mekong and Ganges to the Middle East’s Euphrates and Tigris, Europe’s Danube and North Africa’s Nile and Medjerda in Hedfi’s native Tunisia.

Hedfi’s background as a drummer informs this largely instrumental work, with inventive and often avant-garde percussive patterns amid traditional Arabic quarter tones and the electronic experimentalism of Swedish producer Olof Dreijer. The album also features Tunisian violinist Radhi Chaouali, Palestinian Jalal Nader on bouzouki and bassist Ragheb Ouerghli. The work is a labour of love, taking nine years to create. Perhaps that’s reflective of Hedfi’s background as an academic studying mathematics. There’s a preciseness and attention to detail here that’s exacting. But the imagination is anything but confined. This is a mesmeric dreamscape that conjures an extraordinary world where ancient and modern collide. Not simply Tunisian music, as Hedfi explains, but ‘also made by a woman. That makes a difference. My music doesn’t take up so much space.’ 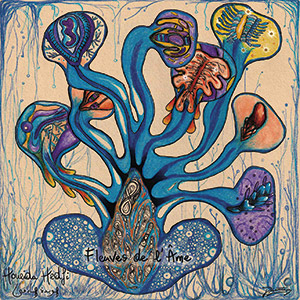