Kemal Belevi is a Turkish Cypriot composer and guitarist. Though his Cyprian Rhapsodies Nos 1-4, Suite Chypre and Turkish Suite, which make up the bulk of this recording, were not originally written for a guitar duo, he has rearranged them so that classical guitarists Necati Emirzade and Mark Anderson might perform them here.

The duo met at the San Francisco Conservatory of Music and Emirzade's Cypriot heritage clearly drew them towards interpreting the work of Belevi. While this is music firmly in the classical genre, its creative source in the eastern Mediterranean offers a layer of texture to interest the world music listener. Belevi draws on Greek, Turkish and other Middle Eastern traditions in his work, particularly the dance tunes. Though refined and classical in style, moments of light, airy tremolo and rhythmic drumming on the guitar give the sense of a Mediterranean tradition that has parallels as far west as the Iberian peninsula. The influence here, though, is of course, mostly Turkish, from the ‘Çiftetelli’ dance tune to the Hicaz makam modal scale. 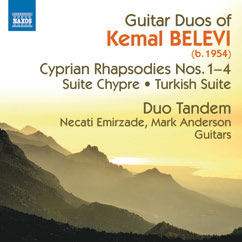