The Voices and Bridges

The number of recording locations worldwide for this album is extraordinary, but perhaps that was the only way to create it, given the political ban on Iran and COVID-19 restrictions. The US-based Iranian composer and santur player Ehsan Matoori’s previous album Phantasm was a collaboration with Mohsan Namjoo, the renowned Iranian singer living in exile. TheVoices and Bridges, his second album, features the glorious voice of Alireza Ghorbani, who lives in Iran. Ghorbani, himself singing in Persian, on this album collaborates with guests who contribute in Arabic, English, Turkish, Bengali, Urdu, Kashmiri, Spanish and French, on texts by among others Borges, Ahmad Shamlou, Pierre Riverdy, Shakespeare, Muhammad Iqbal, Tagore, Nazim Hikmat, Forough Farrokhzad and Rumi, all literary and spiritual icons in their respective cultures and eras. Some collaborations work especially well: ‘Jete Nahi Dibo’ with Bombay Jayashri from India features a wonderful solo by Raman Kalyan on bansuri; ‘Nostalgia’ with Celia Woodsmith who sings in English and Urdu; the Kashmiri Sufi singing of Qaisar Nizami on two tracks; Maya Hobeika sings in Lebanese, Arabic and French and her Arabic track is great; and ‘Bu Geç Vakit’ with UK-based Kurdish singer Olcay Bayir. 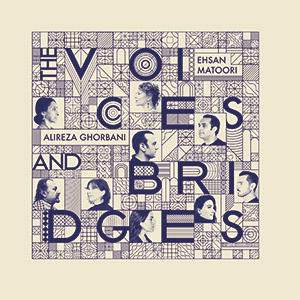 The Voices and Bridges