Bran Sanders hails from Shallow Lake in rural Ontario, though he's since lived a semi-nomadic, busking way through life on the unpaved roads of old-time American folk music. All that travelling finds a home on his first album, recorded with fiddle player Charlotte Germain and percussionist Craig Smith, who feature on ‘Moonshiner’, ‘Sparrow’ and ‘Hills of Mexico’, with the remaining tracks featuring Sanders solo, with his guitar, banjo, harmonica and voice – all you need for the old-time travelling musician's life. And what a voice – Sanders has one that could stop you in a surging crowd. At times it made me think early Cat Stevens with extra layers of tobacco and whiskey. The guitar playing is an assured take on classic early 60s folk club picking and strumming. The repertoire embraces Doc Watson's ‘Red Rocking Chair’ with Bob Dylan's ‘Moonshiner’ taken at a slower, more lyrical pace than the original. ‘Hills of Mexico’, a song from Dylan's Basement Tapes, is given a haunting rendition, and there's a strong original in the ‘oh no it's you again’ revenge song, ‘Welcome Back’. As an assured, contemporary take on American acoustic folk, it's a keeper. 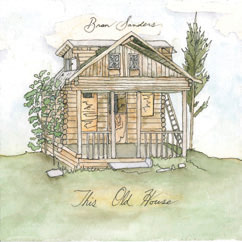