As a Pennsylvania­born singer-songwriter and mandolinist married to a Frenchwoman and living in Cambridgeshire during the Brexit tussles, it’s perhaps not so surprising that Nestlerode feels a bit more settled after moving with his family to northern France. More unexpectedly, the move there during the recording of his third album drew him back to an earlier, less-acoustic version of his musical self, prompting more electric than traditional mandolin as he ‘felt freer to explore new sounds and less traditional ways of approaching this music’ closer to the rock bands of France than to the UK’s fiddles, melodeons, bouzoukis and acoustic guitars.

Lyrically, the title-track celebrates the fortitude of the Windrush Generation, while other key songs encompass much of the story of his own life since 2010, including meeting his wife (‘Unexpectedly’), becoming a father for the first time (‘Tout Ce Qui Fait Toi’), raising a son (‘Being a Boy’) and the worries of being a US citizen married to a French national living through Brexit in the UK (‘Living the Dream’). Somewhat autobiographical too is Nestlerode’s cover of ‘C’est Noyé’ by Victoria Vox, as it was the only French he could speak or sing when he first met his wife. 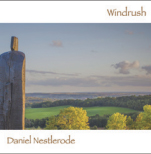