Born in Israel, Ben Aylon has spent much of the last dozen years in West Africa and in particular in Dakar, studying sabar drumming, collaborating with local Senegalese musicians and performing his solo drumming project One Man Tribe. He began recording Xalam back in 2013 and since then two of the album’s key contributors have sadly died – the great Senegalese sabar master Doudou Ndiaye Rose, one of six drummers on the brilliantly hypnotic title-track, and the Malian singer Khaira Arby, whose wailing vocals make ‘Alafia’ an album highlight. Happily still with us, Amy Sacko, wife of Bassekou Kouyaté, makes an equally impressive guest vocalist on ‘Jonibenina’ and the Ethiopian singer AvevA creates an intriguing link between East and West Africa on the gorgeous ‘Hulem Belibe’. The remaining six tracks are instrumental, featuring Aylon’s rhythmic playing of the lute-like xalam and kamalengoni.

What stands out is how seamlessly Aylon has absorbed the essence of diﬀerent West African styles – from Mande griot music to Senegalese mbalax via desert blues – and distilled them into a unique and highly compelling montage to emerge as the blackest toubab (white man) in West Africa. Xalam is already shaping up to be one of my albums of the year. 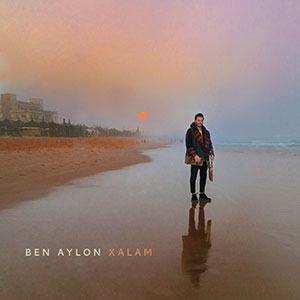