Syssi Mananga is a Brussels-based singer-songwriter of Afro-pop leanings and Belgian and Congolese heritage whose debut, Retour aux Sources(Back to Roots), was well received on its release in 2013. Since then she’s been honing her craft, raising her four children and participating in international schemes such as Beyond Music, the inter-faith music scheme whose ambassadors include Tina Turner and mantra singer Dechen Shak-Dagsay; Mananga’s song ‘Mopepe’ (‘Wind’ in Lingala) won the Beyond Prize in 2019.

From that, we infer, came collaborators across ten different countries for this fine sophomore album, Japanese trumpeter Shunzo Ohno, Swiss flautist Sandro Friedrich, Kenyan rapper Keya Nemesis and guitarist Chris Bakalanga of South Africa’s Freshly Ground among them, each contributing remotely (as dictated by the pandemic) and overseen by arranger, producer, and percussionist Ronan Skillen in Cape Town. Yet another tribute to women and mothers, the 12-track Mopepe Mama is given bewitching strength by Mananga’s soulful melisma and a stance that – despite the preponderance of male musicians – embraces a sort of universal femininity. Standouts include the spine-tingling ‘Nzela’, a song lifted by shakers, strings and an impassioned female chorus, and opener and first single ‘Mopepe’, a flutes-and-guitar-led ode to freedom and spirituality. A seamless, uplifting work. 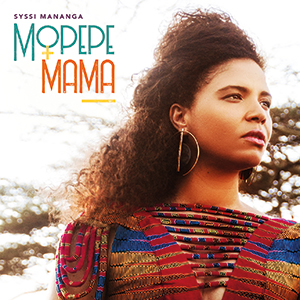